I bought a gift for you. I know I can’t really give it to you, but I wanted to tell you about it.

It’s a crown.  It’s a little one – a Pandora charm.  I pick a different charm for different special occasions ever since you passed away.  And the crown is for your birthday because you were the Queen of our family, really. 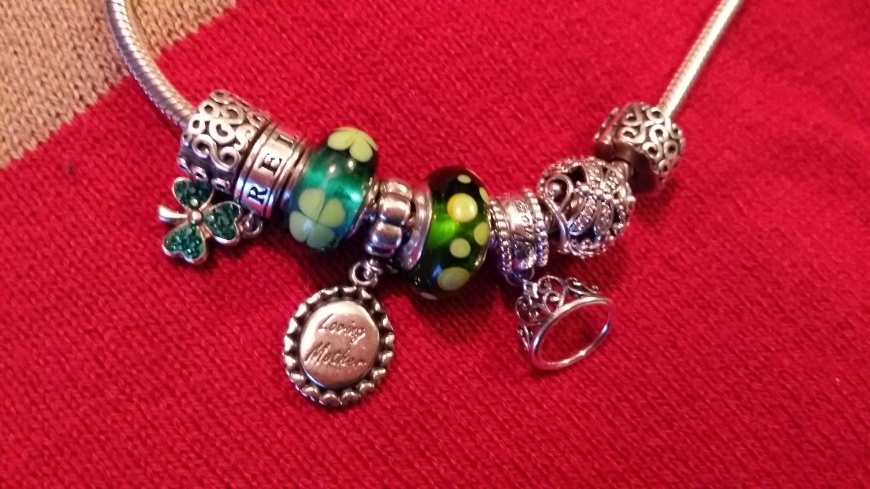 You kept us all together, you cared for a protected us, you were Queen Mother, Queen Sister, Queen Daughter and deserving of being treated like royalty. I wish I had treated you with all the respect, admiration and love that you should have gotten all the time.

I didn’t even show much appreciation for the Pandora bracelet when you first gave it to me.  I loved that you gave it to me, but I was feeling badly that you spent so much money on me. And I wasn’t really a big fan of Pandora or charm bracelets.  At the time, I thought it might look a little tacky to wear all these little pieces on a bracelet.

But now it’s one of my favorite things to wear.  And it has become really precious to me.

From left to right in the picture, let me know tell you what is on each charm that I’ve put on the bracelet so far.

The three leaf clover I bought in Ireland when I wanted to take you with me to Paint the Town Green.  That’s the name of one of my favorite songs, from my favorite band- The Script. I’ll tell you more about that another time.  It’s also St. Patrick’s Day tomorrow, so it’s fitting for that. I am a big fan of Ireland since The Script inspired me and I was able to visit their home town and see them perform there.  And now I’m kind of a sucker for Irish accents. We can talk about that more later too. 🙂

But yeah, that’s the first charm on the bracelet.  the second one I bought to match the round green one that you bought me with the bracelet. The one I chose has a little more aqua marine colour in it, and I didn’t realize until much later that it has these four leaf clover shapes on it too. So it kind of matched the Ireland charm. I think I chose that one for your birthday last year, just after you passed away.

Then there’s the center piece of the bracelet- the dangling, silver oval frame shape that has the words “Loving Mother” inside.  I love that one! It’s so perfect for you.  I think I bought that one for Mother’s Day for you last year. In memory of you being the best mother I could have asked for.

Then there’s the crown I bought for you for your special day today.  I didn’t realize until last night that the engraving along the edge says Snow White. Oops. Oh well, maybe I can find something fitting about Snow White that might be able to connect to you.  Or maybe it’s enough that it’s a fairy tale idea of magic, beauty, strength and an revered female. That would be you.  Plus, I like when you sparkled in your gold jewelry or bright colours like your yellow Panjabi suit.  You sparkled like a jewel. Which reminds me of a Queen and a crown. Also, we all had to listen to you, because you knew what was best. 🙂  Definitely Queen – like characteristics.

And finally, the last charm on my bracelet so far was a gift from Raym, Aria and Kat for Christmas. It has a beautiful engraving of a dragonfly in it.  They chose it because of the dragonfly necklace I wear all the time- the aqua coloured one that you bought me. The last gift I ever got from you.  I hardly ever take that necklace off, and I always get compliments on it.

Oh yeah, it is a dragonfly. I know you and I both thought it was a butterfly. But I learned a few months later that because of it’s longer tail, it is actually a dragonfly.  Now I am obsessed with dragonflies because of it.

Thank you for all our thoughtful gifts, not just the material ones. But also the love and generosity and the sweetness that only a mother could give.  Those were the real gifts that the bracelet and necklace represent and hold.  That’s why they are so significant to me. They came from my beautiful mother’s love.